A Brief History of Computer Printers

Everything you need to choose the right printer

A Brief History of Computer Printers 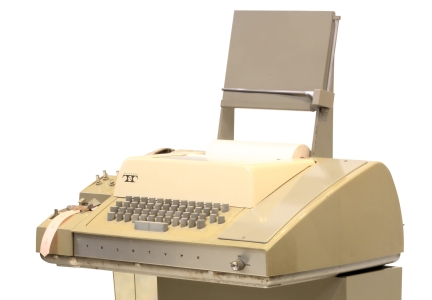 Computers have been around for about 75 to 80 years, depending on who you ask. ENIAC, the Atanasoff Berry Computer, Colossus, maybe something else.

But computer printers have been around longer!

Teletype machines were initially designed as a way to make sending and receiving telegrams easier. They quickly evolved into a complete communications system in the early 20th century. Among the features was perforated paper tape – similar to the punch cards (Hollerith cards) used with tabulating equipment for the census and eventually a common storage medium for mainframe computers for many years. Paper tape was particularly useful for teletype communications. An operator could type at normal speed to create a punched tape and then run the tape through a teletype at the blistering fast speed of 50 baud. That’s a very tiny fraction of the speed of today’s computer networks, but a huge advance over telegraph communication speed.

By the time computers came along, there was a ready-made input/output device which included human input (keyboard), human-readable output (printer) and computer input/output (paper tape reader/punch) all in one handy device – and only 130 pounds for the Model 28! The first “multifunction” printers – before computers existed.

These amazing devices not only became some of the first computer data entry devices and printers, they were actually used as we use computer networks today for widespread communications.

Teletypes, particularly the Model 33, were used extensively with minicomputers and early microcomputers until the 1980s. Microsoft’s BASIC for the Altair, one of the first successful personal computers, was delivered on a teletype paper tape.

Teletypes still live on in Linux and similar systems that use tty to identify terminal sessions.

Unlike teletypes that printed one character at a time, a typical line printer prints an entire line at a time using extremely fast belts or drums containing all printable characters and a hammer for each of the, typically, 80 or 132 columns of the page. They were big, heavy, and very noisy but very fast and reliable.

Just like teletypes, line printers live on with the lp and lpr designation in Linux.

The first commercial dot-matrix printer was the Centronics 101, introduced in 1970. DEC, Epson and other companies came up with more flexible (Decwriter terminals functioned like teletypes but using a dot-matrix printhead), smaller (Epson MX-80 was a great small desktop printer) and better quality (the number of pins went up from 7 to as many 36, though 24 became the standard for “letter quality” for many years). By the mid-1980s and the personal computer revolution, dot-matrix printers were by far the most popular choice for microcomputers due to their low cost, small size and, compared to teletypes, high quality. Impact dot-matrix printers are still used in a limited number of applications today.

The first laser printers were produced by IBM and Xerox in the mid-1970s. However, laser printing came into the mainstream with the HP LaserJet in 1984 and the Apple LaserWriter in 1985. Both were based on the Canon CX print engine, but they were designed for different markets. The LaserJet introduced PCL and the LaserWriter was based on Postscript, and these two printer “languages” are still extensively used today, though now many printers support both of them, as well as many other features.

Inkjet printers spray tiny droplets of ink onto paper. This is actually quite similar to dot-matrix printers, but much quieter and with the ability to use multiple inks for full color printing. The basic technology dates back to the 1950s, but it took advances in electronics and other technology to create the modern inkjet printers in the 1980s. Since then, inkjet printers, as with most other types of printers, have become smaller, faster and cheaper.

The printer market today is dominated by laser printers and inkjet printers. Each has its advantages and disadvantages, but for many users the decision comes down to either Total Cost of Ownership or specific features or performance requirements.